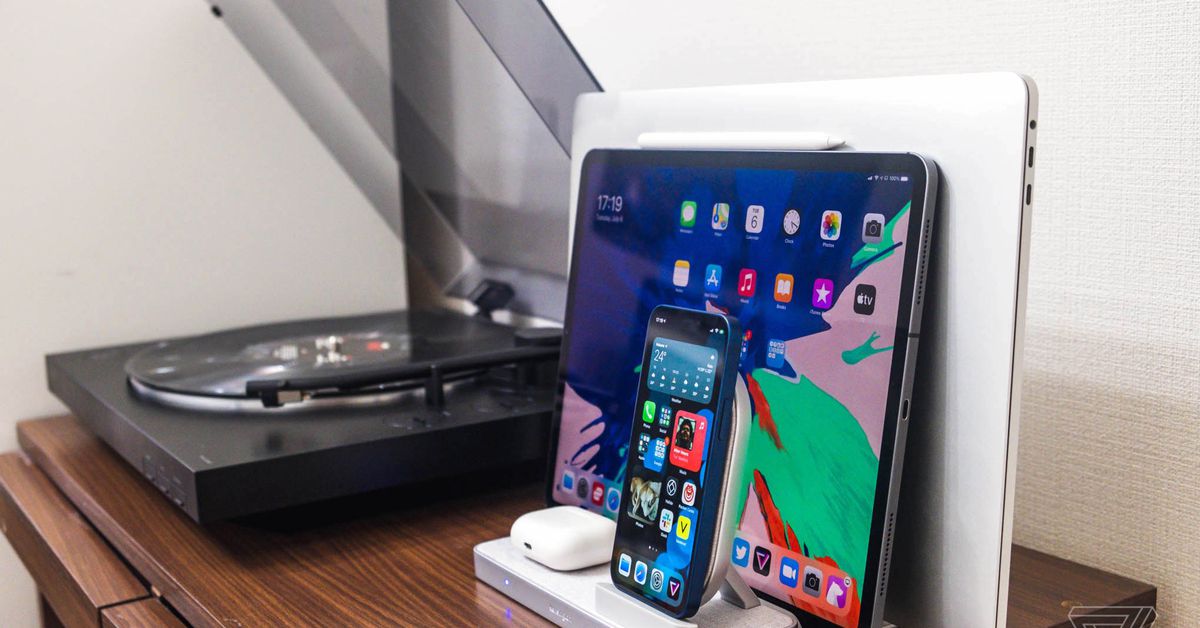 Following the recent release of StudioDock, an opulent booth that turns the iPad Pro into a mini desktop, Kensington is now expanding its Apple-focused offerings with the StudioCaddy to $ 179.99. It’s an unusual product with a simple goal: it’s supposed to be the place where all of your Apple devices can live.

The StudioCaddy is made up of two halves that attach magnetically. The first half is a basic metal stand that you can fit a closed MacBook into, and there’s also a rubberized shelf on the front that’s designed to hold an iPad. The second half attaches to the front and includes two Qi wireless chargers, one vertical for an iPhone and one horizontal with a recess you can put an AirPods case in.

You can, of course, use the StudioCaddy with many combinations of Windows ultrabook, Android tablet and phone, and Qi-equipped wireless headphones. Kensington, however, is focusing on the Apple ecosystem – the full name of the product is actually “StudioCaddy with Qi Wireless Charging for Apple Devices”.

The StudioCaddy is built very well, and each stand is sturdy enough that it won’t get knocked over on a desk. The wireless charging stand also has USB-C and USB-A ports for extra power, delivering up to 20W over USB-C – enough to charge an iPad (but not a MacBook Pro) fast enough, or even an Apple Watch if you wish to complete the set. It’s useful, although the external AC adapter is a bit bigger than I would prefer.

While I’ve found that many vertical Qi chargers don’t work with my iPhone 12 Mini, Kensington has included an interchangeable part that lifts the phone up to raise its wireless charging coils to the correct level. It’s also recommended to use it with smaller phones like the iPhone SE or 11 Pro, although I’ve found various larger Android devices would load just fine with it in place as well.

The main idea with the StudioCaddy is that you can save a lot of space on your desktop by storing all of your Apple devices in one place. In practice, however, I’m not sure people need their iPhone charger to be connected to their laptop. Until recently, I almost always used my MacBook Pro in “clamshell” mode on other media, and put it aside to save space, which the StudioCaddy does well. But I prefer the iPhone to charge in front of me at my desk so I can see the notifications coming in, so the benefit of the all-in-one approach is mostly lost to me.

If your desktop setup allows it, which mine doesn’t, it might be a good idea to place the StudioCaddy next to your monitor with your phone facing you and your MacBook in flip mode. It is, however, a lot of horizontal space to give up. You can also use the two halves of the StudioCaddy independently of each other, and then you will end up with a good wireless charger and good MacBook / iPad stand. But there are plenty of other options for both of these use cases.

You know your office situation better than I do and I can recommend the StudioCaddy if you think it’s right for you. It’s a well-designed, versatile product that does what it’s supposed to do, and most people who have a lot of Apple devices could probably put it to good use. It’s not cheap, however, so you need to be sure it was a better option for you than duplicating all the features with separate products.

The StudioCaddy will be available to order starting today.