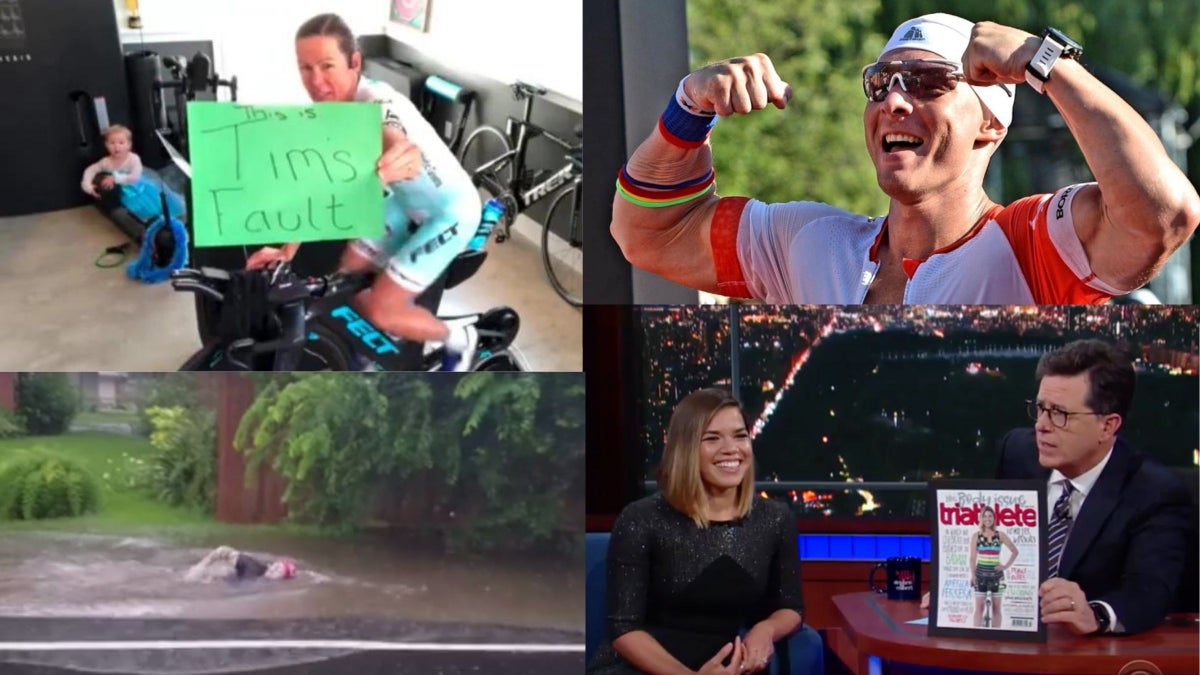 Let’s face it: although we spend a lot of time thinking about swimming, biking and running, for most people triathlon is barely on the radar. “What sport are you talking about ?? That one in Hawaii? ” After all, triathlon is a fun niche sport that is not widely recognized by the general public. This is why we are so excited when something, even remotely, related to triathlon is mentioned casually on ESPN or CNN.

But from time to time, our little sport manages to grow. Sometimes it’s because of remarkable feats or inspiring stories. Most of the time, though, it’s because, well, triathletes are weird. Don’t believe us? Here are six triathlon stories that have gone viral in mainstream news.

Triathlete bathes in Louisiana flood waters near his home

The summer that #Gwensanity peaked at the Rio Olympics was the same summer Louisiana saw heavy rains that led to flooding. One resident, a triathlete named Jo Guidry, merged the two while diving into the murky waters outside his home in full triathlon gear. Her Facebook video, titled “Watch the Olympics and Live in South Louisiana,” quickly went viral and was viewed more than 3 million times after being picked up by several national media outlets.

Max Fennell, the most interesting man in triathlon, was briefly talked about in the reality TV world after appearing on Thousand Millions of Dollars, the competition produced by Lebron James and inspired by American gladiators. The goal: to complete a 1.6 km obstacle course faster than the elite athletes you face (including Fennell, whose nickname on the show was “The Machine”) in search of ‘a million dollar prize. As it turns out, Fennell’s speed on the race course translated well into blocking competitors for money as well.

When actress America Ferrera appeared on “The Late Show with Stephen Colbert,” she brought a little show-and-tell: a copy of the June 2017 issue of Triathlete, where it appeared on the cover. The best part of the look, however, was when a bewildered Colbert tried to figure out what all triathlon involves: “Is that one of those things where it’s so good when it’s over that you feel good ? Like, ‘Keep hitting me in the face, is it so wonderful when you stop?’ “

The New York Times story about triathlete Julie Miller had it all: scandal, intrigue and lots of WTF? The curious case began when Miller won his age group at Ironman Canada in 2015, after a slew of age group wins at several events around the world. Other athletes began to take note of the unusual circumstances surrounding her victories, namely that no one had ever really seen her on the course to the finish line. The NYT investigation uncovered evidence Miller was cutting corners, and the bizarre twists had everyone talking for weeks.

Triathlete banned from restaurant after eating 100 plates of sushi

Let this be a warning: don’t advertise “at will” unless you really mean it, as triathletes can eat a lot. Case in point: German triathlete Jaroslav Bobrowski, who allegedly ate 100 dishes of sushi as part of a $ 26 buffet at a restaurant in Landshut, Germany. This shocked the restaurant owner, who banned Bobrowski for life and sparked a global discussion about who was wrong. (We’re obviously on Team Triathlete. It was clearly a long day of racing.)

This moment The Guardian called Tim O’Donnell a fool

“What an idiot!” the title proclaimed above a photo of two of triathlon’s biggest stars: four-time world champion Mirinda Carfrae and 2019 runner-up Tim O’Donnell. The reason for the insult? Carfrae was chasing a victory in the first-ever women’s virtual race Ironman VR Pro Challenge when her husband O’Donnell tripped over the power cord and severed his connection to the race. When Carfrae restored her video feed, she was holding a sign that read “It’s Tim’s fault!” O’Donnell also had a sign to him: “My bad!” The story took off for its relativity – at the time, the world was adjusting to the technological challenges of a global pandemic, and most had a silly story or two to share.